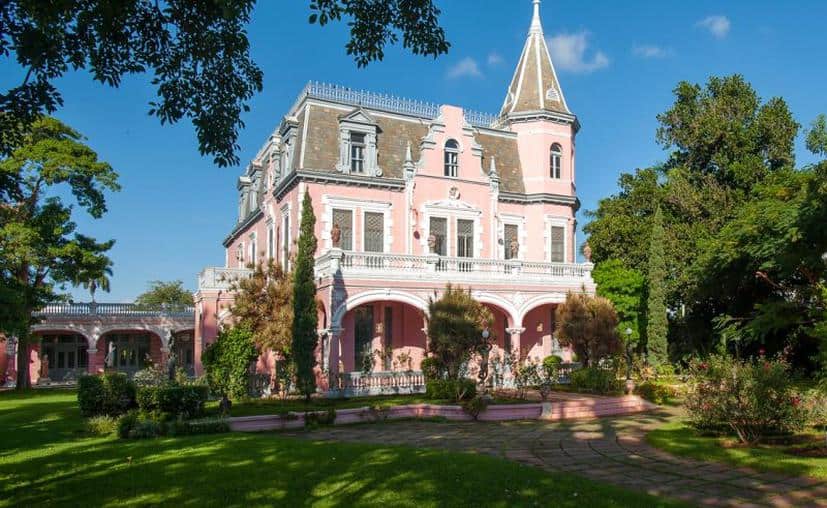 There are 5,057 m2 of stories in the El Pinar house in Mérida waiting to be told.

An old house that arouses intrigue, mistrust and fear behind its pastel pink walls. Its recent announcement of sale, aroused the curiosity and seduction of the building. Get to know it.

El Pinar house It is located in the historic center of the city. A convenient area for the magnificent buildings that await the gaze of curious and tourists.

La Colón is one of the avenues oldest in Mérida, in it are old mansions and buildings that stain Calle 60 with a nostalgia pink color ...

There, on 60th street at the height of Colón, it remains upright since about 1915 the El Pinar house.

Like the opaque painting of an old artist, for decades the house El Pinar remained abandoned, awakening the interest of passers-by, locals and tourists about the identity of the owner.

The house offered a show for everyone who passed by; it was impossible to ignore his french renaissance architecture, the lonely pink color that spit out the walls and the strange blow between the bars that protect the house.

The terrifying love and abandonment story at El Pinar house

Of course there is a love, madness and death story behind a building that is a reflection of the wealth and production of henequen in Yucatan.

According to the history of the house, El Pinar was the access to the old town of Itzimná during the green gold boom. Which places it as one of the most representative henequene mansions of ancient Merida.

Legend has it that in that palace a young Portuguese couple lived strange events that deeply marked the essential of the big house.

Despite the event being less than 50 years old, little is known of the couple's life beyond the history and fame that the house has won.

The eyes of the city tell that for the year 1985 the tragedy of the el Pinar house began, when the woman was bitten by a bat causing her rage.

Let us remember that rabies, a disease also known as hydrophobia and transmitted by dogs, bats, foxes, etc., causes physical and mental symptoms in humans.

Salivation, irritability and hallucinations are the most iconic of hydrophobia.

For the year 1985, there was already a rabies vaccine, however the recovery percentage was low compared to current treatments.

The desperate husband and after exhausting his hope in science, He entrusted the house of El Pinar with the life of his beloved wife.

That's how locked her in one of the rooms in the mansion, leaving the house to be the living hell of the woman he used to call "wife".

The death of the woman was a long process that only the walls that are no longer in the palace could tell.

Screams of anguish crashed into the ears of the closest neighbors. It was a time when rumors came faster than light and in a short time, The entire city was a silent witness.

After the relief of death, the widower leaves the Pinar house and the city of Mérida. The fate of man is unknown, but it is certain that no exile was enough to forget the screams of horror that the house repeated.

Restoration is a truce over time

Inside of history of the mansions in Mérida, the Pinar house is one of the most mysterious due to the scarce information and the ravages of abandonment.

According to the Yucatecan Library through Merida in History El pinar house belonged to Miguel Peón Casares in 1906.

However, on the official website of the site the year of its construction is dated 1915.

Other sources speculate that Humberto Perón was the owner of the El Pinar house, and the man who kept it in total oblivion until it was acquired by Aberto Bulnes Guedea.

Bulnes Guedea was given the task of restoring the soul of the old house and He cured the details and nooks and crannies of the house until he brought it back to life.

Finally, the property was sold to the Molina family. José Trinidad Molina and his wife managed to give him the essence of home that the pink mansion, on the mythical 60th street, begged for so many years.

A new hope for the house El Pinar

Recently El Pinar house opened its doors to the public satisfying the curiosity of thousands of Yucatecans and tourists who waited years to discover its most intimate foundations.

In the guided tours that you can schedule through its website, you will find each of the rooms in the house furnished in detail according to the European luxuries of the life in Yucatan.

If you want to finish your amazement around the house, Check here the short and wonderful virtual tour.

The colors in Yucatan they are part of the language of space to communicate with us. Yucatan in pink It can be a salt mine in Las Coloradas and also a house full of ghosts like Casa El Pinar.

Recommendation to enjoy in Mérida, a delicious Japanese meal.

Yucatan in pink | The red ones

Reside in the best city in Mexico

Foreign Moving: Everything for your change of house

Jazz and live music for an evening to the rhythm of ...

10 advantages of having a smartwatch if you run a company

Everything you need to know to go to Chichen Itzá, wonder ...

10 Tips to move with family to a new city

5 Apps you need for your business

This website uses cookies to improve your experience while you navigate through the website. Out of these, the cookies that are categorized as necessary are stored on your browser as they are essential for the working of basic functionalities of the website. We also use third-party cookies that help us analyze and understand how you use this website. These cookies will be stored in your browser only with your consent. You also have the option to opt-out of these cookies. But opting out of some of these cookies may affect your browsing experience.
Necessary Always Enabled

Performance cookies are used to understand and analyze the key performance indexes of the website which helps in delivering a better user experience for the visitors.

Analytical cookies are used to understand how visitors interact with the website. These cookies help provide information on metrics the number of visitors, bounce rate, traffic source, etc.

Advertisement cookies are used to provide visitors with relevant ads and marketing campaigns. These cookies track visitors across websites and collect information to provide customized ads.

Other uncategorized cookies are those that are being analyzed and have not been classified into a category as yet.